Board Games or Video Games

Are Board Games Better Than Video Games?

Quintin Smith has an interesting post over at Kotaku in which he argues that board games and pen-and-paper RPGs are superior to video games, for a number of reasons.

For one, technology itself and the entire development process required to put together a major video game can muck it up beyond recognition. Board games, on the other hand, have a very low design threshold. Whereas creating a video game is akin to swimming through shark-infested waters, a board game can be designed and prototyped shark-free.

“When you buy a board game, what you take home and play is the original concept precisely as it was in the designer’s head,” writes Smith. “That’s the mecca for video games. For board games, it’s the norm.”

“This isn’t me clawing at the jaws of a dinosaur as it goes bubbling down into a tar pit, either,” he writes. “Board game sales are actually increasing, year on year, and have been for more than a decade. Board games, would you believe it, seem to be coming back.”

“You can buy a great board game for under $20, and every time you play it, it’s a new game,” Silver noted. “This is a toy that can be played over and over again, so the consumer sees value in this type of purchase.”

Compare that with any major release on the consoles. Gamers pay $60 for a vanilla title, and often fork out more for downloadable content or expansion packs.

Quintin’s argument is pretty compelling, but I’m not entirely sold. Yes, board and pen-and-paper games do come from a pure spring of ideas and aren’t bogged down with the limitations of tech or the high expectations of massive profits. But aren’t we just comparing apples to oranges?

A good Dungeons and Dragons campaign is hard to beat on its own terms. You have to imagine a great deal. And you have to set aside a pretty substantial chunk of time. Not just your time either. You need to find actual people to play with. Video gamers often play with friends either in the flesh or online, but at least in my experience the time requirements of a good board game or pen-and-paper RPG are vast in comparison.

It is not unique at all being a gamer with lots of time constraints: between kids, spouse, work, and sleep most of life is already plenty occupied. Any hypothetical person you could play a board game with would have all the same (or many of the same) restraints as you would.

Gaming is an adult hobby now, and adults get the short end of the stick compared to our youthful counterparts at least when it comes to managing time. Video games are wonderful, in part, because they can achieve some of the same emotional gratification and entertainment value that board games and pen-and-paper games give us. They’re also more visceral.

Whereas board games require us to think, and pen-and-paper RPGs require us to imagine, video games tap more directly into the actual play. There’s pros and cons to each form, and while both low and high-tech gaming can be extremely fun and gratifying, I think we’re talking about two very different experiences that can’t really be held up the one against the other.

In the end, the more the merrier. More games, more gamers, more people spending their time playing rather than doing all the other awful things we do.

Technology may be a cross video game designers are forced to bear, but it’s also a promise of things to come – a double-edged digital sword. Maybe a lot of the limitations in gaming so far, or at least in role-playing and story-intensive video games, are due to the still-evolving way in which we tell stories in games. Maybe the gaming industry has mirrored too often the film industry, and needs to get back to its cardboard root. 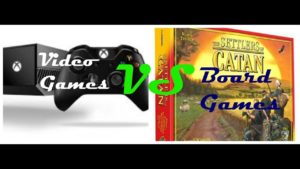 Real Estate Investors Ride Record US Economic Expansion “Commercial real estate investors are among the biggest winners in the U.S. economic expansion, which reaches a record 121 months this week