Sacramento is the capital city of the U.S. state of California and the seat of government of Sacramento County. It is at the confluence of the Sacramento River and the American River in the northern portion of California’s expansive Central Valley. Its estimated 2014 population of 485,199 made it the sixth-largest city in California.[9] Sacramento is the cultural and economic core of the Sacramento metropolitan area, which includes seven counties with a 2010 population of 2,414,783. Its metropolitan area is the fourth largest in California after the Greater Los Angeles area, the San Francisco Bay Area, and the San Diego metropolitan area, and is the 27th largest in the United States. In 2002, the Civil Rights Project at Harvard University conducted for TIME magazine named Sacramento “America’s Most Diverse City”.

Sacramento became a city through the efforts of the Swiss immigrant John Sutter, Sr., his son John Sutter, Jr., and James W. Marshall. Sacramento grew quickly thanks to the protection of Sutter’s Fort, which was established by Sutter in 1839. During the California Gold Rush, Sacramento was a major distribution point, a commercial and agricultural center, and a terminus for wagon trains, stagecoaches, riverboats, the telegraph, the Pony Express, and the First Transcontinental Railroad.

The city was named after the Sacramento River, which forms its western border. The river was named by Spanish cavalry officer Gabriel Moraga for the Santísimo Sacramento (Blessed Sacrament), referring to the Catholic Eucharist. 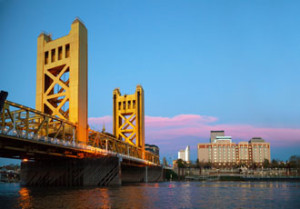 Depth to groundwater is typically about 30 feet (9 m). Much of the land to the west of the city (in Yolo County) is permanently reserved for a vast flood control basin (the Yolo Bypass), due to the city’s historical vulnerability to floods. As a result, the greater metropolitan area sprawls only four miles (6 km) west of downtown (as West Sacramento, California) but 30 miles (48 km) northeast and east, into the Sierra Nevada foothills, and 10 miles (16 km) to the south into valley farmland.

The city is located at the confluence of the Sacramento River and the American River, and has a deep-water port connected to the San Francisco Bay by a channel through the Sacramento–San Joaquin River Delta. It is the shipping and rail center for the Sacramento Valley. Food processing is among the major industries in the area.