Blog What Style is Your House?

What Style is Your House? 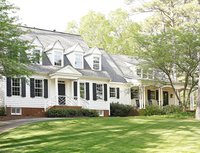 Colonial-Style Homes – dating back to 1876 – is one of the most popular home styles in the United States. Colonial-style homes usually have two or three stories, fireplaces, and brick or wood facades. The classic Colonial-style house floor plan has the kitchen and family room on the first floor and the bedrooms on the second floor.

Tudor-Style Houses – The name of this style suggests a close connection to the architectural characteristics of the early 16th-century Tudor dynasty in England. But the Tudor houses we see today are modern-day re-inventions that are loosely based on a variety of late Medieval English prototypes

Craftsman Houses – The Craftsman bungalow (also known as Arts and Crafts) was a popular house style between 1905 and the 1930s, and it’s making a comeback today. If you’re wondering what is a craftsman house, step inside. A distinguishing feature of the style is the large amount of interior woodwork, such as built-in shelving and seating. As for the exterior, Craftsman-style homes often have low-pitched roofs with wide eave overhangs, exposed roof rafters, decorative beams or braces under gables, and porches framed by tapered square columns.

Traditional Ranch Homes – Traditional ranch-style homes usually have simple floor plans, attached garages, and efficient living spaces. The style dates back to 1932 and is still being built today. It was one of the most popular styles in the suburban home-building boom of the 1950s and 1960s

Contemporary-Style Homes – Referring specifically to architect-designed homes built from about 1950 to 1970, the term “contemporary” has come to describe a wide range of houses built in recent decades that concentrate on simple forms and geometric lines. The International style paved the way for contemporary style homes, which reflect the experimentation and dynamism of the postwar Modern period in which many Modernist ideas were integrated into the American aesthetic.

Mediterranean-Style Houses – Mediterranean styles of architecture, such as Spanish Colonial Revival—also known as Spanish Farmhouse or Spanish Eclectic—flourished in Southern California during the 1920s and 1930s following a noteworthy appearance at the Panama-California Exposition of 1915

Q: I am selling my house without the use of a real estate agent. My current buyer came to me through his agent. Closing is still several weeks off. Due

In our current real estate world, at least in the Greater Sacramento area of California, there is a group who seems to be omitted from most conversations and media attention